During my travels across Madagascar I was fascinated by the resourcefulness of people, how for example they can load one old bicycle with four large bags of coal and bravely pedal uphill in heat just so they can help each other and deliver it when needed. 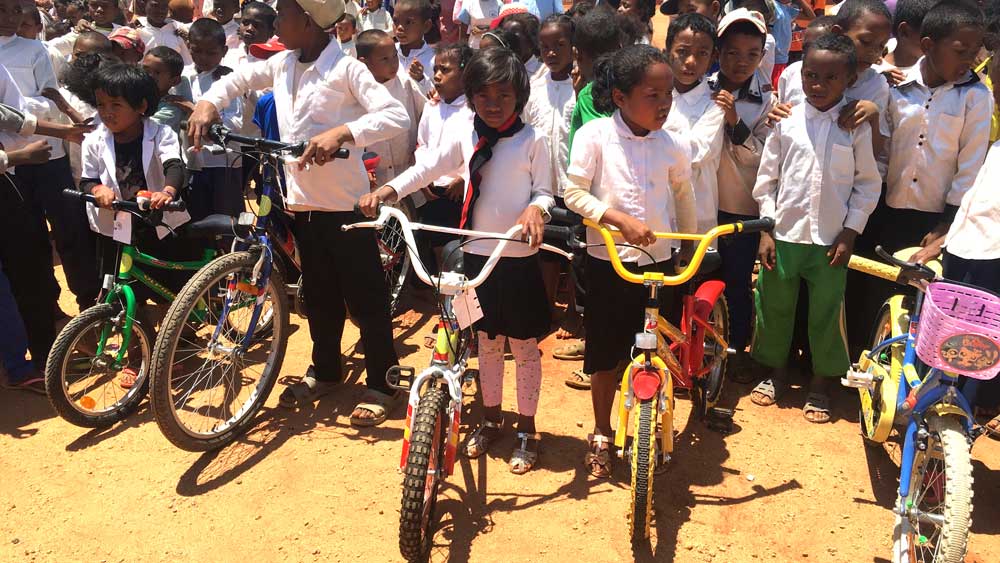 In the spring of 2018 my cousin has offered me several older bikes because they were clearing their cellars and were trying to get rid of them, the whole family has already bought new ones which were better and trendier. They were redundant and taking up space.

I remembered the people from Madagascar, how they move necessary things on those unbelievably bad bicycles and cherish it because they can’t afford anything else. It’s like with an old car. If you can’t ride it you can at least push it with a load of wood from the forecast, so you can cook lunch for the kids, just by having two wheels on it.

I got an idea how these redundant but functioning bicycles could improve the life of people in Madagascar.

The first time I have spoken aloud about this was in front of my son and his friends, I instantly got a positive reaction. I believed we could truly make it happen, by me covering everything necessary and I just knew we would go for it without looking back.

We’ve called the idea “DARUJ BICYKLU NOVÚ DUŠU” (“GIVE A BIKE A NEW SOUL”/the Slovak translation of the inner tube of a bicycle is also “soul”) and sent out the flyers. I was under the impression that if we collect 70 pieces then I’ll be glad and will cover the cost of container transportation. At the end we had to stop the project in July, when we already had 122 fully functioning bikes. We could hardly fit them in the container. Each one of them got a green number, a Slovak flag and a contact information of the giver.

It was then that I remembered words of some haters that were saying why would anybody give away a fully functioning bike for free? My answer was that I believe there are people like that in Slovakia, who feel and think like me.

What did I want to achieve with the bicycles? That in Europe, things that are not needed anymore could be used for good in third world countries. Let’s not forget the value of things that seem to not be needed here but could be great gifts elsewhere. Here we loaded bicycles, there they received them as ‘cars’.

Where is actually the problem? The problem is in exporting redundant but functioning things to third world countries because it’s a lot of work without any profit so nobody wants to do it. Some might say a waste of time and we all need to earn money… which is fine, I was there once in life.

In November 2018 we arrived to Madagascar with a group of volunteers from Slovakia to fix and hand out the bicycles to the students of the school as a reward for good grades, to teachers and lower income individuals, last but not least we hadn’t forgotten the doctors in the local hospital. I cannot even describe the feelings I had when we saw those stunned children not believing it’s their bicycle, when we saw tears in the eyes of an older troubled father of several kids or when we have received a great deal of honor and diploma by the local hospital workers.

The bicycles had written its story and it was real and very honest. Our donors were excited when they got a picture of a Malagasy holding their bicycle and is very happy about it. Joy on every page.